Twenty of the new cases are in Da Nang, six in neighboring Quang Nam Province, two in Quang Tri Province, one in the northern province of Bac Giang Province and one in Sam Son town of Thanh Hoa Province, all linked to Da Nang outbreak.

One of the confirmed cases in Da Nang, "Patient 718," a 67-year-old woman, died of Covid-19 and other diseases Wednesday afternoon, making her Vietnam's 10th Covid-19 fatality.

Patients numbered 719-723 and 730, aged 30-51, were recorded in Quang Nam. Among these are two patients and a caretaker at the Da Nang Hospital and three people who had been in close contact with patients at the hospital who were later diagnosed with Covid-19. All six are now quarantined for treatment at the Quang Nam Central General Hospital.

Patients numbered 724-729 and 731-743, aged 1-69, were recorded in current Covid-19 hotspot Da Nang. Nine of them had come into close contact with Covid-19 patients. Five of them are patients, three caretakers and another a medical worker at Da Nang medical facilities. Another new patient is from Da Nang's Thanh Khe District, whose contact history has not been clarified.

"Patient 744" is a 7-year-old girl in Bac Giang who had been in close contact with two previously confirmed Covid-19 patients and was in the same tourist group to Da Nang with three other Covid-19 patients. She's now being treated at the National Hospital for Tropical Diseases in Hanoi.

Patients numbered 745-747 were on a ship which traveled from Qatar and docked July 28 at the Vung Tau Port in Ba Ria-Vung Tau Province. They were quarantined upon arrival and are now being treated at the Long Dien District medical center. Six others on the ship had previously been confirmed infected.

"Patient 748" is a 54-year-old woman in Sam Son Town of Thanh Hoa Province in the north central region. She had contact with a person who got infected from the outbreak in Da Nang.

As she was isolated, her samples were taken for testing on Wednesday. The result turned out positive the next day.

Patient numberes 749-750 is 27 and 28 years old. They live Quang Tri Province in central Vietnam. “Patient 749” stayed at the Da Nang Hospital to take care of a sick family member from July 17. Four days later, she started developing Covid-19 symptoms of slight fever, sore throat and muscle pain. "Patient 750" is a 28-year-old man residing in Dong Ha District of Quang Tri. He is a friend of a previous infected case and came into close contact with that case on July 18. 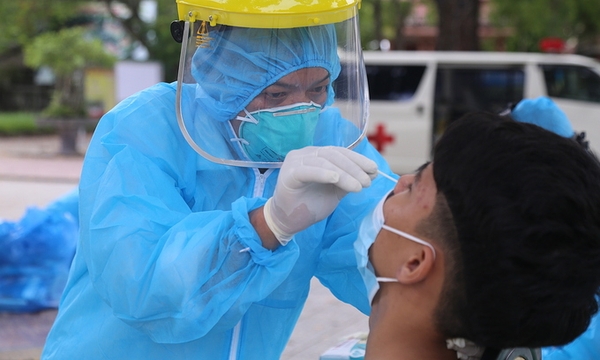 Vietnam has reported 750 cases of Covid-19 since the beginning of the pandemic. Of them, 392 have recovered, 10 died and 348 are still in hospitals.

The nation is putting more than 170,000 in quarantine.

Around the world, the pandemic has killed more than 716,300.ang Hospited to Da Nang Hospital recorded 37 more cases, totally