For the most part, the Harvard Heart Letter focuses on treatments that are already available for people with heart disease. In this article, we’re making an exception. Editor in Chief Dr. Deepak L. Bhatt selected five innovative technologies in the world of cardiovascular health that he predicts we’ll be hearing more about in the coming years. 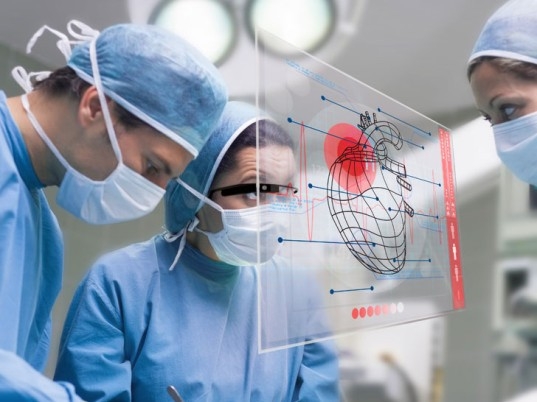 Google Glass, the best-known example of wearable computing technologies, consists of a headset that sits on your face like a pair of eyeglasses. But this sophisticated mini-computer can take pictures, record videos, and wirelessly transmit data. Physicians can wear the hands-free device during medical procedures to record and transmit images without having to handle cameras and contaminate the sterile surgical environment. One potential use for Google Glass is during coronary angiography, in which a doctor injects a special dye into the heart’s arteries to reveal possible narrowings or blockages. In one small study, angiographic images broadcast through Google Glass to computers or iPads were sharp enough to be accurately interpreted by experts who weren’t present during the procedure. In the future, this technology could allow people with heart problems to benefit from the expertise of cardiologists around the globe.

During an artery-opening angioplasty, doctors usually place a tiny mesh tube called a stent that releases drugs into the vessel to keep it open. But over time, clots can form inside stents. Preventing this may require long-term drug treatment. A new type of stent that gradually dissolves within a year or so may help sidestep that problem. Called bioresorbable stents, they also enable treated vessels to regain their ability to constrict and expand. In one recent trial, the everolimus-eluting bioresorbable stent was just as effective as the most commonly used drug-eluting stent. However, currently available bioresorbable stents are less flexible and therefore harder to place inside arteries than metal stents, which limits their use in more complex coronary artery disease. But some experts hope further advances in the technology may allow bioresorbable stents to replace metal stents in the future.

Traditional pacemakers consist of a small battery-operated power source implanted under the skin. Wires known as leads deliver electrical impulses to the heart muscle to help maintain a normal heartbeat. Although pacemakers are in general very reliable, the leads represent the weak link in the system. When complications do arise, they most often involve a broken lead (which can cause a malfunction) or an infection at the insertion site. In addition, some people have anatomical differences that make it difficult to implant the lead. The leadless pacemaker is a tiny, self-contained unit that is placed on the inside wall of the heart through a thin, flexible tube called a catheter. The first version of a single-chamber pacemaker placed in the heart’s right lower pumping chamber looks promising. Future iterations may be available in the next few years.

Heart valves made from animal tissue (called bioprosthetic valves) are increasingly used to replace stiff, narrowed aortic valves. Compared with mechanical valves, they carry a lower risk of clot formation, which means people who get them probably don’t need long-term anti-clotting drugs. The catch is that bioprosthetic valves don’t last as long as mechanical valves, so a recipient may eventually require another surgery to replace the valve a second time. Now, a less invasive technique called a valve-in-valve procedure is more often being used instead of that second surgery. A new bioprosthetic valve is inserted into the heart via a catheter at the site of the failing device. More research needs to be done on the pros and cons of this procedure in younger patients. But it may turn out to be the best valve replacement option for people at high risk from surgery.

During a heart attack, heart muscle cells suffer damage and die. Since these cells cannot fully regenerate, scar tissue forms instead. This makes it harder for the heart to pump blood effectively and ultimately may lead to heart failure. Recently, a team of health and bioengineering experts discovered a natural protein that can promote the regrowth of normal tissue. In an early study using mice and pigs, the researchers discovered that when a patch containing this protein was sewn on the animals’ damaged heart muscle, cardiac cells actually began to regrow, and heart function returned to near normal. Scientists hope to begin human clinical trials of the patch within the next two years.