More than 40 European countries have been hit by COVID-19, the disease caused by the novel coronavirus. Italy, Spain, Germany and France were the four hardest-hit, with each reporting more than 10,000 confirmed cases 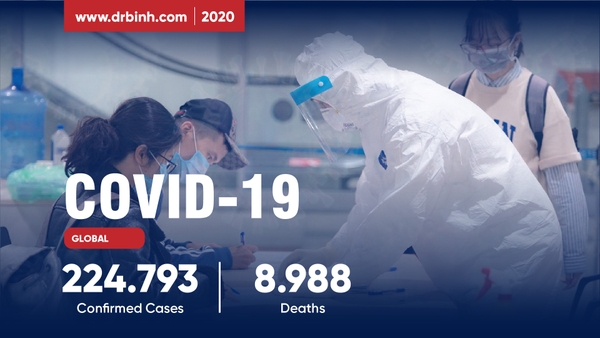 Italy has just surpassed China for the most number of deaths related to COVID-19. The total number of cases in the country rose to 41,035 on Thursday, which includes 5,322 new cases, the Italian Civil Protection Agency said at a news conference. The number of deaths in Italy has reached 3,405. Italy has become the deadliest center of the COVID-19 outbreak.

US has more than 13,000 cases, California governor estimates 25.5 million residents will get virus.

Spain recorded the second most cases among European countries after Italy. Spanish health authorities said the number of COVID-19 infections rose to 17,147 on Thursday, a 25-per cent increase on Wednesday's figure of 13,716, with 767 deaths from the virus.

During a press conference, Health Minister Salvador Illa said Spain is approaching the peak in the number of COVID-19 cases. "We are reaching the hardest moments, in which we will see an increase in cases as we close in on the peak" of infections," he said.

Germany and France reported more than 10,000 COVID-19 cases on Thursday for the first time.

Data from Germany's disease control agency Robert Koch Institute (RKI) showed the number of confirmed cases of COVID-19 has risen to 10,999 on Thursday, with 20 new deaths, bringing the death toll to over 40.

As many as 108 patients lost their lives in the past 24 hours, he noted, adding that 1,122 patients are currently in intensive care while 1,300 have recovered. He urged people to strictly respect the confinement order and cut contacts with others to curb the accelerating spread of the virus.

By Thursday afternoon there were 3,269 confirmed cases in the UK, and 144 deaths from the virus.The Department of Health said 64,621 people have been tested, with 61,352 confirmed as negative. The Brexit Chief David Frost also isolates himself, after showing symptoms of coronavirus, a British official said. Earlier, the news of his EU counterpart Michel Barnier having signs of COVID-19 crossed wires.

The death toll from the coronavirus in Iran continues to rise as the worst-affected country in the Middle East prepares for scaled-down celebrations of Norouz, the Persian New Year.

"With 149 new fatalities in the past 24 hours, the death toll from the virus has reached 1,284," Deputy Health Minister Alireza Raisi said on state television on March 19.

“Unfortunately, we have had 1,046 new cases of infection since yesterday,” Raisi added.

Iran has the third-highest number of registered cases after China and Italy.

Kianoush Jahanpour, the head of the Health Ministry's public relations and information center , noted on March 19 that the data on the outbreak means an Iranian dies every 10 minutes from COVID-19, while 50 infections occur each hour of the day.

Vietnam's Ministry of Health confirmed nine new cases of novel coronavirus infection Thursday night, bringing the total confirmed cases in the country to 85. Vietnam has recorded 69 novel conoravirus infections since March 6 after going 22 days without any new case. Sixteen earlier patients have been cured and discharged from hospitals.