A newly discovered mechanism causes cancerous cells to kill themselves off, and researchers say it could be particularly effective for aggressive forms of the disease, such as pancreatic cancer.

Once the process is activated by modifying specific proteins inside cancerous tissue, the relentless division that drives the disease is drawn to a halt, causing cancer cells to die off rather than spreading throughout the body. And unlike current cancer treatments, this technique leaves the healthy cells alone. 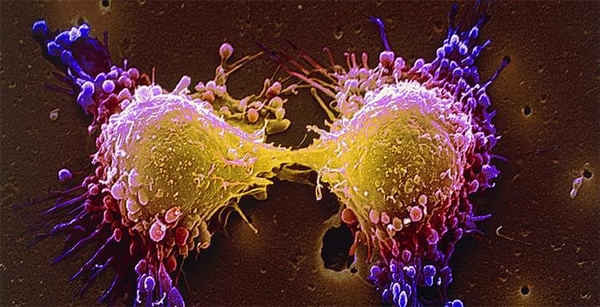 Researchers from Tel Aviv University in Israel observed the effect in cancer cell cultures and human cancer cells transplanted into mice, and the next step is to figure out if this mechanism can also work in the human body.

"The discovery of an exclusive mechanism that kills cancer cells without impairing healthy cells, and the fact that this mechanism works on a variety of rapidly proliferating human cancer cells, is very exciting," says lead researcher Malka Cohen-Armon.

The scientists focussed on proteins that affect the construction and stability of the spindle – the part of the cell responsible for organising genetic material during a stage of cell division called mitosis.

The team found that certain compounds in cancerous cells - derivatives of the chemical phenanthridine - end up disrupting the spindle, preventing cell chromosomes from splitting, and stopping the cell from dividing.

A cancerous growth is essentially mitosis out of control, but with the division halted thanks to the new protein mechanism, these cancer cells can die off rather than spreading throughout the body.

"According to the mechanism we discovered, the faster cancer cells proliferate, the faster and more efficiently they will be eradicated," says Cohen-Armon.

The team tested the technique with positive results on a variety of tumour types in human cancer cell cultures, including breast, lung, ovary, colon, pancreas, blood, and brain cancer.

This is one of several avenues of research currently exploring ways to kill off cancer cells with minimum damage to the body.

Last year, researchers from Georgia State University identified a protein called ProAgio that could trigger cancer cell death, initiating the natural process of apoptosis in cancer cells – the process our bodies use to clear away old cells, and which cancer cells usually evade.

Research to develop these findings into treatments continues.

For their part, the team from Tel Aviv intends to study further how the protein mechanism combats triple negative breast cancer and pancreatic cancer, as they work towards developing a possible anti-cancer drug.

The findings have been published in Oncotarget.